This year again the yearly update on the sperm whales that were befriended by many fans, supporting cetaceans’ conservation in the Pelagos Sanctuary 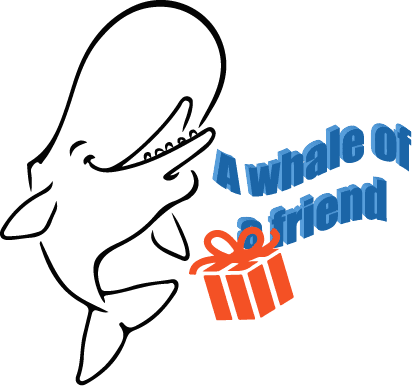 Do you want to befriend a whale? Click here to see how! 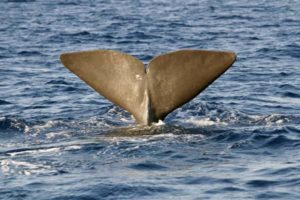 As promised to all those who made friends with one of the sperm whales studied by Tethys in the Sanctuary of the Ligurian Sea, here are the updates on the last season. We had already anticipated this: Henry, the sperm whale who appears to be the most faithful to our location of research, has been sighted this year as well.
It’s well-known that Henry is a young male, of about 20 years of age; he tends to swim around on his own, which is something that is typical of adult males. This year the renowned sperm whale has been sighted by the participants of the team CSR10 in the second half of July. Unlike past occasions however, our friend was located in an atypical area, much more off shore compared to our “usual” sperm whale-area, namely over the continental slope where the bottom of the sea rapidly drops, and where sperm whales find their preys, squids. 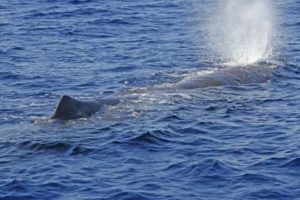 As can be seen on the map, where the 2015 sighting has been marked with an X, this year Henry was swimming much further off shore, in an area 2000 metres deep, where researchers would actually expect to find fin whales. But marine mammals, it is well known, are full of surprises. Like last time, it was possible to estimate Henry’s length, through an acoustic system (see the 2012 update on the bottom of the page about this technique); our sperm whale has reached the length of 12,8 metres and therefore appears to still be growing. Males can reach 18 metres, a considerable size – even though not the size films show us on several disproportionate “Moby Dick”.
Even though we haven’t had the chance to meet them this year, we are sure that Gaby, Fede, Luke, Noni, Matt “thank” their friends and know someone cares for them! Thanks to all those who have supported the research for the protection of whales and dolphins in the Pelagos Sanctuary! See you next season, sperm whales… 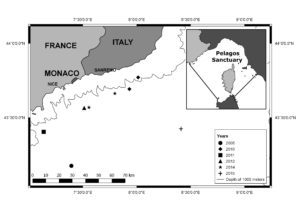 Here is the 2014 update about the sperm whales that many fans have”befriended”, and by doing so have sponsored the environmental protection of cetaceans living in the Pelagos Sanctuary. 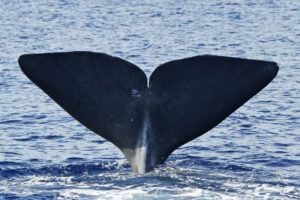 A young male, quite a creature of habit if we look at the encounters that researchers on board the “Pelagos” have recorded this year, “Henry” is one of the most “faithful” sperm whales in our catalog; he was once again spotted last July, in an area that is particularly relevant for researchers. Among the six sperm whales that you can befriend through Tethys (as a gift to yourself or to someone else) – Noni, Matt, Luke, Fede, Gaby – this year Henry was the one that was re-spotted. And not only once, but twice.

But let’s proceed in order. Overall, we’ve had 36 encounters with sperm whales during the past season, which saw the motorsailer “Pelagos” at sea with researchers and volunteers from May to late September. In nearly five months, 44 individuals have been identified. As it’s known, the research program includes, among other things, the photographic identification of the tail of each individual sperm whale at the time of diving, just to record new individuals and to check which of those already known have been re-spotted. But that’s not all: once again the Physeter macrocephalus data collection included acoustic recordings – 80 altogether – that will be used both to estimate the size of the various animals and to evaluate the so-called “creak rates”, vocalizations that indicate foraging activity. 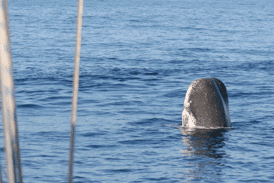 But let’s go back to Henry: the lucky observers were those of team 11 CSR, who met him for two days in a row, on the 15th and 16th of July. In both cases he was alone, which is quite typical of males of this species, when they start to become adults. It is estimated that Henry has now little more than twenty years, just a “younster” who until two years ago was still growing, as the lenght measurements had shown. The surprise came when the researchers marked the sighting location on the map: the first day Henry was really close to the place where he was last seen on the 14th of September two years ago, roughly in front of Monaco / Cap d’Ail, 20.5 km offshore. The previous week had been characterized by unstable weather conditions, and researchers had worked hard to meet as many sperm whales, fin whales, dolphins and Risso’s dolphins as possible. The efforts were rewarded the next day with another sperm whale spotted in front of Ospedaletti, about fifteen miles from the coast, at a depth of 1300 meters. And it was again our old friend Henry, as we could easily determine from the pictures. Henry has a rather smooth tail, with no special marks (at least for now, because those could come with time), but nonetheless recognizable by the profile and by a typical white mark. Two quick calculations were enough to establish how far our friend had travelled in one day, nearly 22 km between the point of the first sighting and that of the second one.

Henry, as we’ve mentioned, is an old acquaintance of ours, repeatedly met by Tethys’s boat over 9 years; the first sighting dates back to 2005; he was then re-spotted in 2010 (twice), in 2011 and then again in 2012. Take a look at the map below, which says quite a lot about the habitat preferences typical of sperm whales in the Pelagos Sanctuary: on the continental slope, just beyond the depth of 1000 meters (indicated by thin black line), where the bottom falls sharply up to 2000 meters, is the area preferred by this species to hunt for squid, on which it feeds.

On this regard, we at Tethys, along with volunteers at sea and sperm whales “friends”, want that marine mammals of the Sanctuary continue to have a “home” to live undisturbed. We believe we do our best, with research expeditions, to try to ensure the preservation of the environment not only for Henry, but for all cetaceans that inhabit the sanctuary. This year, again, Tethys’s staff wants to thank all those who “befriended” Henry – or Noni, Matt, Luke, Fede, Gaby –  for themselves or as a X‚’mas or birthday gift. We are sure that, if he could, Henry would say thank you, too.

And, in his own way, maybe he did. 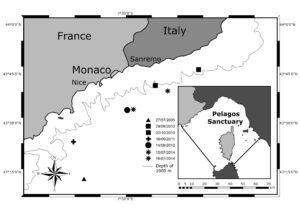