It’s too loud in the Mediterranean: scientists present the first underwater noise map

Human activities using loud noise sources cover very big portions of the Mediterranean Sea, as announced in a special press release by OceanCare. Their impacts on marine wildlife should be cause of concern; in several clearly identifiable areas noise-producing activities accumulate, and many of these so-called noise hotspots overlap with important cetacean habitats. This is a conclusion reached by scientists from France, Italy, Switzerland and the US who – for the first time – present a basin-wide map that shows the density of the main anthropogenic noise sources in the Mediterranean Sea. The results of the report ”Overview of the Noise Hotspots in the ACCOBAMS Area, Part I – Mediterranean Sea” for the period 2005 to 2015, are drawn from a dataset covering 1446 harbours and marinas, 228 oil drilling platforms, 830 seismic exploration activities, 7 million ship positions, publicly available information regarding military activities, and 52 wind farm projects. 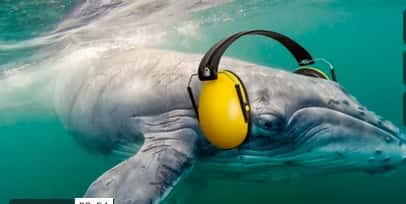 The increase in seismic activities is particularly striking, especially in connection with oil and gas explorations which deploy so-called ‘airguns’ sending loud impulsive noise of up to 260 decibels towards the sea floor about every 10 to 12 seconds for weeks or months at a time. While 3.8 % of the Mediterranean’s surface was affected by such airgun use in 2005, this share increased to 27 % in 2013. The scientists also found that an average value of around 1,500 commercial vessels are contemporarily present in the area – at any given time – not taking into account leisure crafts and fishing vessels. Considering that data surrounding military activities – such as manoeuvres, use of medium and low frequency sonar (LFAS, MFAS) for submarine detection, etc. are generally not available to the public, such results for this sector represents an underestimation of the reality of the situation as well. 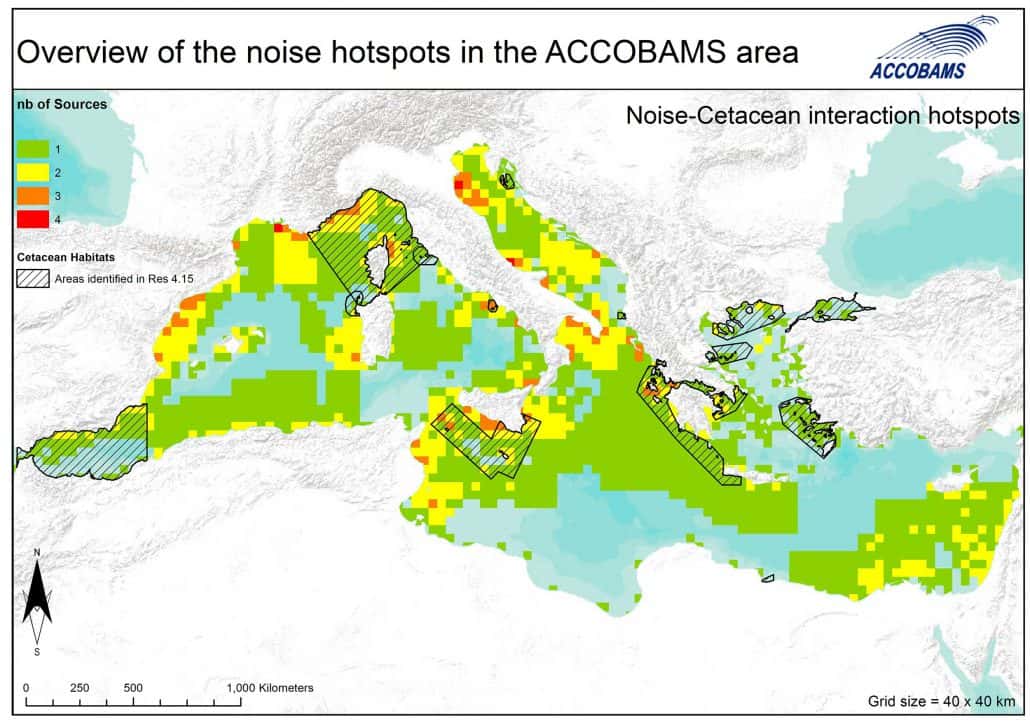 Crucially, through such mapping exercise, the scientists were able to reveal several noise hotspots overlapping with areas that are of particular importance to noise-susceptible marine mammal species, and/or areas that are already declared protected areas. Such important cetacean habitats include the Pelagos Marine Mammal Sanctuary in the Ligurian Sea, the Strait of Sicily, and parts of the Hellenic Trench, as well as waters between the Balearic Islands and continental Spain where noise-producing activities accumulate, according to the report. The risk for the marine animals in such areas is thus high, as they are exposed to cumulative and synergistic noise, and hence, extensive sources of stress.

Such threat has also been recognised by the Spanish Government. Their Ministry of the Environment recently announced that the waters between the Balearic Islands and the Spanish mainland will be designated a protected migration corridor for whales and dolphins, which will also result in strict management measures for noise producing activities.

“This report is the first basis for a purposeful development of noise reducing measures. It substantiates the urgent need for action to establish a transparent data register on anthropogenic noise sources in the Mediterranean and to take measures to reduce the problem”, says Silvia Frey, PhD, co-author of the report and director for science and education at OceanCare. Implementing such a register is also part of the EU Marine Strategy Framework Directive’s current action plan.

“With this report, we stand at the beginning of an acoustic assessment of the Mediterranean Sea as a marine habitat. Thus far, only noise sources which are timely and spatially incomplete could be identified. Hence, there is further need for scientific investigations into noise levels within the Mediterranean and, moreover, into what can be assessed as an acceptable and safe noise limit. Nevertheless, this first glance is remarkable and the extent of the noise sources is worrisome”, explains Frey.

“The present mapping also reveals data weaknesses, as we have to assume that some areas currently identified as ‘quiet’, particularly along the coastline of Northern Africa, are only considered quiet due to a lack of data. In particular, activities by oil and gas companies, as well as the military remain largely obscure”, adds Nicolas Entrup, consultant on underwater noise pollution for OceanCare and for US-based organisation NRDC.

“For the first time we have a wide spatial and temporal vision of the multiple and often overlapping human activities that produce noise underwater and that may have synergistic and cumulative effects on marine life. We now need models to map sound levels and sound exposure. We should not forget that conservation also means ‘conserving the acoustic quality of the habitats’”, says Gianni Pavan, co-author of the report and professor of the University of Pavia, Italy.

“Loud noise sources appear to cover very big portions of the Mediterranean Sea, and, of course, their impacts on marine wildlife propagate, regardless of human boundaries. Although far from being exhaustive, results shown in this study point out the need of a regulatory framework which takes into account the transboundary effects of man-made noise on the marine environment”, Alessio Maglio, co-author and scientist at SINAY SAS, adds.

The report was commissioned by the Agreement on the Conservation of Cetaceans in the Black Sea, Mediterranean Sea and Contiguous Atlantic Area (ACCOBAMS) in order to identify areas of concern, to propose the need for further scientific assessment, as well as to deduce appropriate conservation measures.

The authors of the report are: