Cetacean Sanctuary Research (CSR) Cruises range between the italian and the french coast, in the heart of the specially protected area for whales and dolphins called “Pelagos Sanctuary”

The activities of the Cetacean Sanctuary Research (CSR) are conducted in the heart of the “Pelagos Sanctuary”, a large marine area protected for whales and dolphins, listed as Specially Protected Area of Mediterranean Importance (SPAMI). The Project’s study area  extends seawards from Sanremo, where the cruises leave from. The borders are approximately capo Mele on the italian coast, Saint Raphael on the french coast and the northern part of the island of Corsica.

A peculiar interplay of winds, currents and upwellings, together with the dramatic shape of the sea bottom, characterized by seamounts and deep canyons, create vertical mixing and lift nutrients from the depth; this makes the Ligurian-Corsican basin teem with life like probably no other area in the Mediterranean.

The proof is that the Sanctuary is home to eight cetacean species, i.e. all those regularly living in the Mediterranean, in higher numbers than in the continguous areas. Among those are large whales such as fin and sperm whales, several species of dolphins and other toothed whales, and many other large vertebrates such as turtles, devil rays, sea birds, tuna and swordfish. 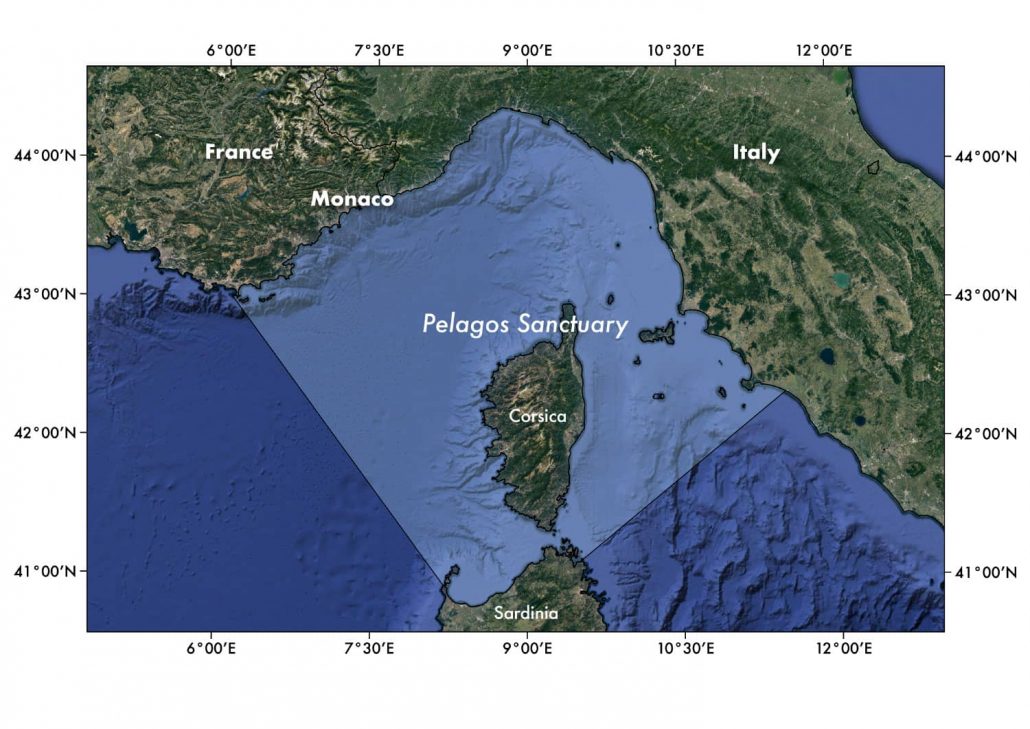 The Pelagos Sanctuary extends about 90.000 km2 in the north-western Mediterranean Sea between Italy, France and the Island of Sardinia, encompassing Corsica and the Tuscany Archipelago; in 1999 it has been established by three nations, Italy, France and the Principality of Monaco, becoming the first high-seas and the first supra-national protected area in the world.

It was Tethys who, back in 1990, first proposed a project for the establishment of a marine biosphere reserve to the European Association Rotary for the Environment; the Institute’s studies had shown that this was the most important habitat for cetaceans in the region, given its high species diversity and its intense biological activity.

Although cetaceans are formally protected in the Sanctuary, whales and dolphins continue to face many threats, from chemical and noise pollution, to collisions with fast ferries, to entanglement in fishing nets; from scarsity of food due to overfishing to global climate changes.

The Cetacean Sanctuary Project has been collecting the largest dataset of its kind, over the longest timespan, which represents a sound baseline for the conservation of cetaceans and their environment in this precious area of the Mediterranean.

Learn more about the Pelagos Sanctuary