Tethys authors at the 31st ECS

At the 31st annual conference of the European Cetacean Society which took place in Middlefart, Denmark, last April 29th to May 3rd, Tethys’ researchers presented following contributions as first authors. 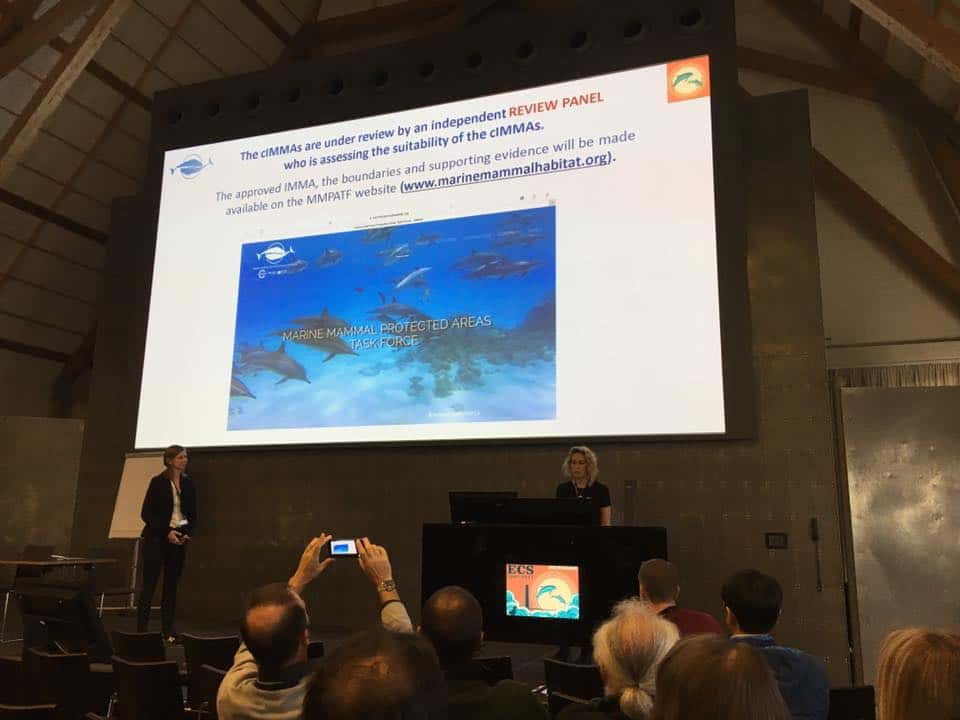 Can satellite telemetry, aerial surveys and Important Marine Mamma Areas (IMMAs) facilitate cetacean conservation in the harsh environment of the Strait of Sicily?

The Strait of Sicily, a ‘hotspot’ for Mediterranean biodiversity, also represents the main deep-water channel between the Eastern and the Western Mediterranean Sea, with severe traffic volumes between the Suez Canal and the Strait of Gibraltar. Despite its importance, prior to 2016 almost all the available information on cetaceans arose from anecdotal reports. The identification of critical habitats for cetaceans in the Strait of Sicily, along with migration routes to and from summer fin whale feeding grounds in the Central Mediterranean Sea, is therefore crucial to develop efficient and effective conservation efforts. Here we report the results of a dedicated aerial survey carried out in March-April 2016 in an area between south Sicily and the Tunisian coast and of data collected by deployment of satellite transmitters on fin whales off Lampedusa in March 2013 and 2015. A total of 7,450 km were flown in acceptable visibility conditions and best abundance estimates of striped dolphins (N = 15,200-16,400 individuals) and bottlenose dolphins (N = 1,200-2,000 individuals) were computed with model-based and design-based approaches. Five satellite transmitters were deployed to evaluate whale movements and habitat use; a hierarchical switching state-space model was used to identify transiting and area-restricted search (ARS) behaviours, the latter indicating foraging activities, while tracks were independently overlaid with a potential foraging habitat model, based on chlorophyll front detection. Areas where fin whales predominantly engaged in ARS behaviour were identified within the Strait, and some individuals undertook mid- to long-distance migrations, crossing one of the world’s busiest maritime routes. The present findings corroborate the identification of Important Marine Mammal Areas (IMMAs), further supporting the need of establishing and implementing an international protection regime based on effective seasonal/dynamic management.

The IUCN Joint SSC/WCPA Marine Mammal Protected Areas Task Force (MMPATF) is in the process of identifying a global network of Important Marine Mammal Areas (IMMAs). IMMAs are a place-based conservation tool identifying discrete portions of habitat, important to marine mammal species, that have the potential to be delineated and managed for conservation. The first workshop was held in October 2016 and was attended by 34 experts covering all of the 7 Mediterranean sub-regions assessed (Alborán Sea, Algero-Provencal Basin, Tyrrhenian Sea, Adriatic Sea, Strait of Sicily-Tunisian Plateau, Ionian Sea-Central Mediterranean, Aegean Sea, and Levantine Sea). Expert information was collated in advance through the use of a Data Appraisal Form (DAF) and an online SeaSketch IMMA facility. This information helped to create an Inventory of knowledge for the Mediterranean Region (including citations, expert contacts, and knowledge gaps), and a list of 72 Areas of Interest (AoI) for consideration as candidate IMMAs. After consulting the IMMA selection criteria experts identified 41 candidate IMMAs throughout the region for 10 species of marine mammal (including Physeter macrocephalus, Delphinus delphis, Tursiops truncatus, Ziphius cavirostris, Balaenoptera physalus, Monachus monachus, Grampus griseus, Orcinus orca, Globicephala melas and Phocoena phocoena). Additionally, experts identified a new list of 35 AoI in the region which will form the basis of new recommendations for monitoring and future assessments of IMMA status. These Mediterranean cIMMAs, once assessed by an independent review panel, will act to enhance current and future efforts of marine biodiversity conservation and ecosystem health for consideration by governments, intergovernmental organisations, conservation groups, and the general public. This includes the activities of the Agreement on the Conservation of Cetaceans in the Black Sea Mediterranean Sea and Contiguous Atlantic Area (ACCOBAMS) and the recommendation for an ‘advisory’ management plan for the marine mammals in the Strait of Sicily / Tunisian Plateau.

Linking the dots: sperm whale corridors and connectivity in the Mediterranean Sea

Moving among multiple, connected habitats is paramount to the persistence and conservation of a species. Sperm whales in the Mediterranean roam across the basin but information on the movement routes are lacking. Based on the species habitat preference only, we implemented Corridor Loss Penalty (CLP) to obtain a baseline map of all the potential corridors of movements across the entire Mediterranean. We then used Least-Cost Corridor (LCC) modelling in combination with circuit theory to identify and prioritise movement routes amongst known core areas. The quality and importance of each identified corridor were assessed through cost-weighted distance to Euclidean distance (CWD:ED) and the cost-weighted distance to least-cost path ratios (CWD:LCP). Pair-wise and global current-flow centrality (CFC) was used to evaluate the contribution of each core area and corridor in facilitating animal movement. LCC analysis show that the mapped corridors vary in their importance in the overall network, with the highest quality ones being Alboran Sea-Balearic, Gulf of Lion-Ligurian Sea and Hellenic Trench-Island of Rhodes ones. The results of CFC analysis show that the waters surrounding the Island of Ischia, the Balearic Islands and the Strait of Messina have the highest centrality scores (CS) values, suggesting that they represent important nodes in keeping the core areas interconnected. The corridors between the Strait of Messina and the waters surrounding the Island of Ischia and the Hellenic Trench have the highest CS values, highlighting that the Strait of Messina could be the main corridor between the Eastern and Western Mediterranean. This is the first attempt to assess regional-scale connectivity for the Mediterranean Sea sub-population of sperm whales. This information could be critical to focus mitigation and conservation actions and to help planning and developing networks of Marine Protected Areas and the recently proposed Important Marine Mammal Area across the Mediterranean Region.

The last samurai: who said bottlenose dolphins are not tough?

Based on the outputs issued from the ACCOBAMS Workshop “Developing Tools to Ensure High Quality MMOs in the ACCOBAMS Area”, held during the 30th ECS Conference in 2016, ACCOBAMS Parties expressed, during their Sixth Meeting in November 2016, the importance of providing a standardized training programme for Marine Mammals Observers (MMOs) operating during human activities generating noise.

The Resolution 6.18 “Implementation of an ACCOBAMS Certification for Highly Qualified Marine Mammals Observers” was adopted in order to guarantee throughout the Agreement area a high quality standardized training of MMOs/PAM. It will:

Relevant trainer organizations will be accredited by the Permanent Secretariat based on requirements set up by the ACCOBAMS MMO WG. An “ACCOBAMS School”, composed by relevant experts identified by the ACCOBAMS MMO WG, will provide them with standard supports. The accredited trainer organizations will then train and certificate relevant experts to become “Highly Qualified MMO/PAM operators”.

The objective is to encourage ACCOBAMS Parties to give, in priority, permits for activities in their national area, to industrial companies employing Highly Qualified MMOs/PAM operators or at least other internationally agreed certifications.

Experts of the “ACCOBAMS School” are under identification by the ACCOBAMS MMO WG and will be invited to propose formal standardized supports for trainings by June 2017. In parallel, there will be early this year a launch for organization to candidate for accreditation. The announcement of the ACCOBAMS MMO/PAM “certification” and the first accreditations for trainers organizations are planned to be deliver during the 31th ECS conference. The first ACCOBAMS Highly Qualified MMOs are planned to be certificated during the Fourth Biennial Conference for South Mediterranean Countries (Oran, October 2017).