Recently, in Turkey, fishermen unexpectedly caught 30 giant devil rays and landed them in Izmir, intending to export the meat to Greece. The landing contravenes Mediterranean agreements to protect the endangered species: under a 2012 measure adopted by the General Fisheries Commission for the Mediterranean, landing and selling all shark and ray species listed under a special protocol of the Barcelona Convention is banned. Turkey and Greece are both signatories to the convention.

Devil rays have a very low reproductive rate and are particularly susceptible to overfishing. The giant devil ray of the Mediterranean is classified as endangered on the IUCN Red List of Threatened Species.

Several marine conservation groups, among which is Tethys, have condemned the incident.

Here is their joint statement:

Following the widely disseminated incident of the unusual landing of 30 Giant devil rays (Mobula mobular) in Izmir, Turkey, and the reported information, that the fishmongers’ intention is to market the catch, mostly to Greece, we would like to express our serious concerns.

The Giant Devil Ray Mobula mobular (Bonnaterre, 1788) is one of the most magnificent and charismatic animals of our oceans. It has been recorded to attain a maximum disc width (analogous to wingspan, as used for bird morphometrics) of five metres, the largest of its genus, while it presents an extremely low reproductive rate, by giving birth to a single large pup at unknown intervals. Its geographic range is limited to the Mediterranean Sea and possibly to adjoining eastern Atlantic waters.

The only known directed fishery for the Giant Devil Ray was recently discovered in the Levantine Sea. Purse seines are used by Palestinian fishermen in late winter and are likely unsustainable. Elsewhere they are not a direct target, however Giant Devil Rays have been taken as bycatch in many different fisheries (most notably in pelagic driftnets) in several locations within its range. 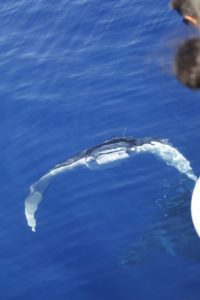 The species has suffered a serious population reduction of at least 50% over three generations (60 years). Since 2006 it has been assessed as Endangered in IUCN’s Red List, and is listed in Annex II to the Barcelona Convention SPA/BD Protocol, Appendix I of the Convention on the Conservation of Migratory Species of Wild Animals, and since 2017 in Appendix II of the CITES (Convention on International Trade in Endangered Species of Wild Fauna and Flora). Furthermore the parties to the Barcelona Convention agreed that this species cannot be retained on board, trans-shipped, landed, transferred, stored, sold, displayed or offered for sale, and must be released unharmed and alive, to the extent possible, pursuant to Recommendation GFCM/36/2012/3 (FAO 2012). It should be also noted that Giant Devil Rays are strictly protected by EU (72/2016/EU), Croatian (Law of the Wild Taxa 2006), Maltese (Sch. VI), Israeli (since 2005), Greek (PD 67/1981) and Turkish (Environmental Law No. 2 872) legislation.

Although it is possible that these animals were caught accidentally, it is the duty of the fishermen to release them alive. If they were caught with purse seine (the website doesn’t give this information – but this is most likely), it is quite possible to release the animals without hauling them aboard, thereby ensuring their survival. If the reported information cited by the article is confirmed, the fishermen have decided instead to market the catch, despite the very low market value of these animals. In our opinion it is very important that a close attention should be given to Giant Devil Ray captures by the competent authorities. Taking into account the above protection and conservation status of the species, accidental captures could become accessory and subsequently direct if a market is allowed to develop. This could be extremely problematic for the survival of a species, a challenge which Turkey has committed to.

Since legal and binding conservation measures have been already established through national and international legislation, Mediterranean countries need urgently to co-operate and enforce such commitments. In parallel it is important to educate and inform fishermen, involved stakeholders and the general public on the value and status of such iconic and unique marine animals, that serve as flagship species and could contribute significantly in sustainable developmental practices and initiatives, instead of being pointlessly removed and extirpated from their natural environment.

Tethys authors at the 31st ECS
Scroll to top