June 22nd 2020 the fin whale (Balaenoptera physalus) with no flukes,  “Fluker” or “Codamozza”, as it was called by the different research teams, has reached the heart of the Pelagos Sanctuary, and was cruising quite close to the shore between Genova and Savona and then again back along the ligurian coast of “Levante” (reported by Walter Spagna). The previous sighting of the whale dated back to June 20th between the islands of Elba and Pianosa, filmed by the “Marina del Campo Diving Center”, after a whole week with no sightings. Before that it had left the Strait of Messina, where the italian Coast Guard together with Carmelo Isgrò from Muma Museo del Mare (Museum of the sea) in Milazzo had ‘escorted’ it for a stretch, making sure it would not be ran over by the intense ferry traffic in the area. Despite its terrible handicap, it traveled over 100 km per day.

The general public as well as many research groups got fond and moved by the animal’s sad story, almost certainly mutilated because of humans, and in the past few days they were able to reconstruct the story in more detail, after researchers of the sicilian Association MeRis had confirmed its identity: the mutilated fin whale was the one that had for years been known as ‘Codamozza’ or ‘Fluker’. 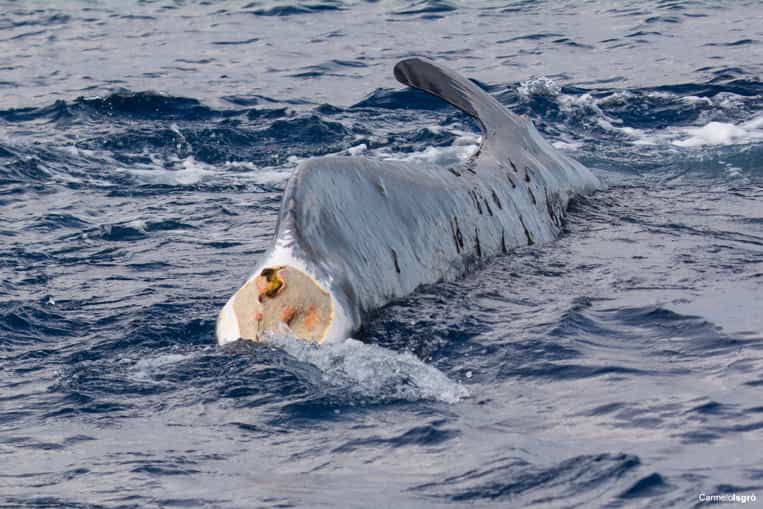 The very first known sighting is the one in Tethys’ photo – identification catalogue, and dates back to 1996, in the area where the Institute operates, in the ‘heart’ of the Pelagos Sanctuary, the big marine protected area for cetaceans in the Ligurian Sea, Tyrrhenian Sea and Corsica Sea. At the time, the fin whale already had half of its flukes missing, and that is thought to be the result of a first accident; it was easily recognizable because unlike its conspecifics it used to raise its flukes before each dive. After that, it would be sighted on a regular basis by different research and whale watching organizations in the area: it was seen by Tethys again in 2004 and 2005, by Blue West in 2005, by WWF France in 2006, 2009 and 2013, by Whale Watch Genova in 2018, and by several others. “Codamozza’ will become a sort of mascotte of the Sanctuary, a symbol of the will to survive despite a significant impairment.

According to the latest findings by researchers, the unlucky fin whale’s situation must have precipitated between August and September 2019. The latest sighting with its “normal” flukes happend around Port – Cros in France; not even a month later came the first scary photos of the mutilation, offshore of S. Jean Cap Ferrat. Therefore the second incident must have happened in this time frame and most likely within the Sanctuary, which was purposely set up to protect cetaceans.

Experts initially thought of an entanglement in some fishing equipment, but a timeframe of just a few weeks seems too short for a necrosis and the complete loss of the flukes, according to veterinarian and chief of CERT Sandro Mazzariol.

So, this would rather suggest a sudden event such as a collision with a boat’s propeller.

Whilst the whale seemed to manage fairly well for over 20 years with half its flukes, it now appears very thin and emaciated with a scary stump instead of its flukes. According to researchers from MareCamp, who documented its move in the Catania Sea on Saturday June 6th,  the fin whale is not only emaciated at its sides, but also its dorsal fin is floppy and tilted, signs that make us fear for the animal’s survival. Having traveled from the Sanctuary to Syria, Greece and then Calabria and Sicily, Fluker is most likely desperately looking for food.

In the Mediterranean this species normally feeds  at depth, where it filters krill, and “Codamozza” may have difficulties diving. The lack of flukes, the part that normally ensures propulsion, probably costs the fin whale an abnormal and overly high level of energy consumption.

In this season, fin whales usually head towards the Pelagos Sanctuary to feed on the abundant krill in the area (Meganyctiphanes norvegica). The tenuous hope of Tethys experts, who have been conducting research on cetaceans collisions for a long time, is that “Codamozza” is able to feed  in the particularly rich waters of Ligurian Sea and Corsica Sea, that the fin whale is so familiar with.

It is important to note that the Parties of the Pelagos Deal have financed an ad hoc study programme on the subject of collisions. The research project called “Proposal to develop and evaluate mitigation strategies to reduce the risk of ship strikes to fin and sperm whales in the Pelagos Sanctuary’ is led by Tethys Institute; chief responsible is Dr. Simone Panigada,  current president of Tethys and of the scientific Committee of ACCOBAMS. In the case studies of the collisions within this project (expiring in September) this specific case will be taken into consideration and more dedicated mitigation measures will be pointed out.

Once again,Tethys expers recommend boaters to not approach the whale so as not to cause futher stress, and to warn the Coast Guard in case of sighting.