The sad story of the flukeless whale

We first saw this unusual fin whale back in 2005; it appeared somewhat odd because when it dived it would raise its flukes above the water, which is something that this species do not usually do. But it was only at a second glance that I noticed its anomaly: it was missing the left part of its flukes. This was most likely the reason why it was diving at a different angle, almost as if it was limping. We called it “Codamozza’ (“cut-off flukes”) and this name unfortunately rings true even more so today: the poor animal completely lost its flukes since October and it wanders around the Mediterranean more and more weakened; missing the organ that usually guarantees propulsion, it seems unable to dive and therefore feed.

At the time Codamozza seemed to enjoy staying in the Pelagos Sanctuary, where it was sighted for several years, by us from the Tethys Research Institute and by various other colleagues and whale watching companies who work in the area. The disabled fin whale had become a mascotte for the sanctuary, a symbol for the will to survive. But one day, the situation got worse. Here is its story. 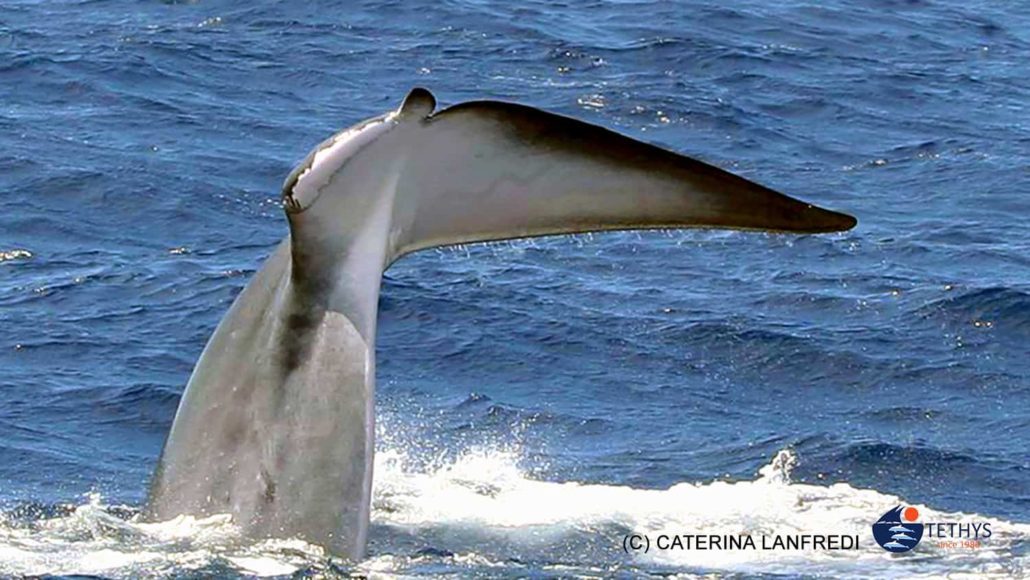 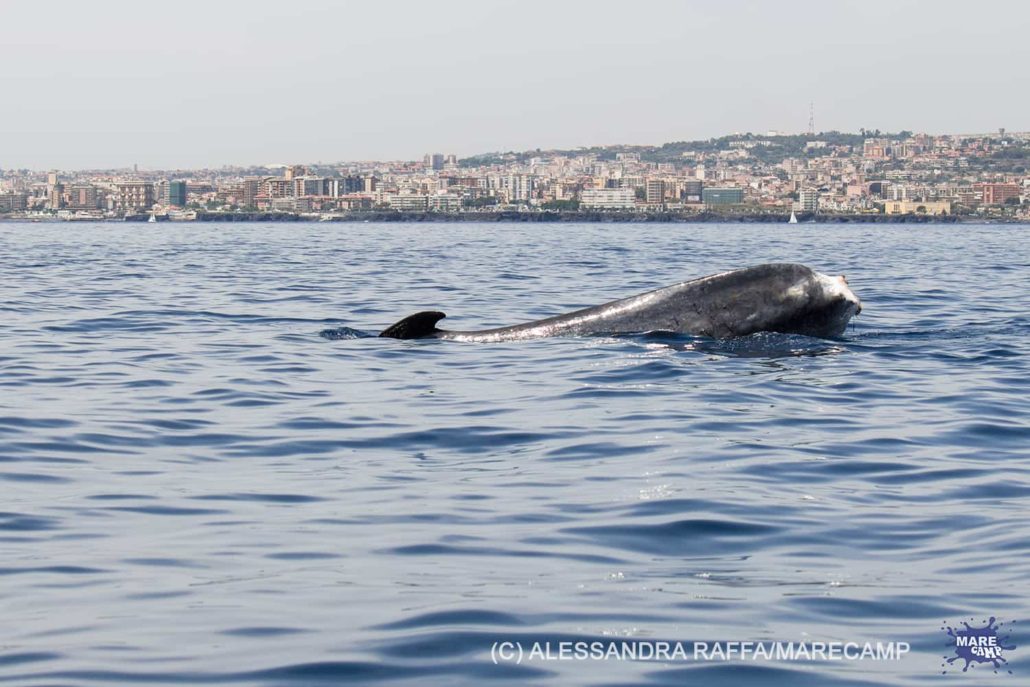 The fin whale (Balaenoptera physalus) completely missing its flukes, which was sighted in the past days off the shores of Calabria and in the Catania Gulf, wandered around the busy waters of the Strait of Messina on Sunday June 14th, escorted and monitored by the italian Coast Guard to avoid a potential collision with ferries, with the help of Carmelo Isgrò from MuMa Museum of the Sea of Milazzo. According to researchers the cetacean has covered thousands of kilometres despite its handicap. The animal with the missing flukes had already been sighted in October off the shores of Spain and France, then later in Syria and Greece.

The first sighting in Sicily had been attained on Saturday by MareCamp, a non – profit association operating in the Catania Gulf to monitor and safeguard whales and dolphins. It had been sighted by artisanal fisherman Antonio Costanzo and it was later spotted by the local Coast Guard.

This was actually an individual that was well known in the Pelagos Sanctuary, the large protected transnational area that includes the Ligurian Sea, the sea of Corsica and the Tyrrhenian sea; the fin whale is also part of the photo – identification catalogue from Tethys, the non – profit organization that has been studying marine mammals in the Mediterranean for over 30 years for their protection; its researchers had spotted this fin whale in 2005 for the first time, with half of its flukes already missing.

Based on an examination of the marks on its body and a small scar in front of its dorsal fin, it was confirmed that the fin whale spotted in Spain and Catania was indeed “Codamozza”;  it was most likely the same individual spotted in Greece and Calabria.

The fin whale with no flukes swims surprisingly fast, given its impairment. It tends to stay on the surface though, without going under water for long and regular dives as normal. It also looks emaciated with deep concavities on its sides. All evidence would suggest that it cannot feed.

When it comes to potential causes for the missing flukes, a collision with a ship has been hypothesized; Tethys leads research on this very topic, with the project “Ship Strikes” funded by Accordo Pelagos, with the aim to evaluate the phenomenon, which has become more and more serious with the increase of maritime traffic, and to suggest potential measures of mitigation.

Now everyone wonders what may have caused this further mutilation: another collision or a fishing line or net that having been tight around the caudal peduncle may have caused a necrosis and the subsequent loss of its flukes. The latter is the most likely hypothesis according to the veterinarians of CrediMa and CERT, but a cut caused by a propeller cannot be ruled out either. The poor animal’s conditions are unfortunately not promising: even if it can move on the surface of the water despite the mutilation, it cannot seem to propel itself to dive deep to feed.

We recommend not to cause further stress to this animal by going close with boats, and to warn the Coast Guard if spotted in the next days.

The long journey of the fluke-less fin whale in the Mediterranean
Scroll to top
Posting....